One goal I will not be crossing off my list this year as accomplished is blogging every week.  Oh well- such is life!  I can’t believe summer is almost half over already. We’ve been trying not to melt in the Florida heat, but enjoying the beaches and paddleboarding and motorcycle rides.  Yes, D bought a motorcycle. I think we both picture this: 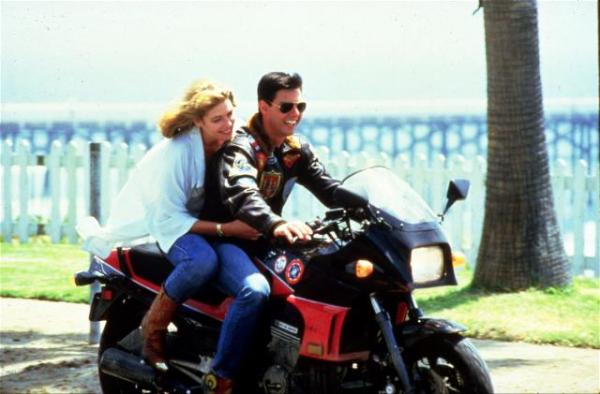 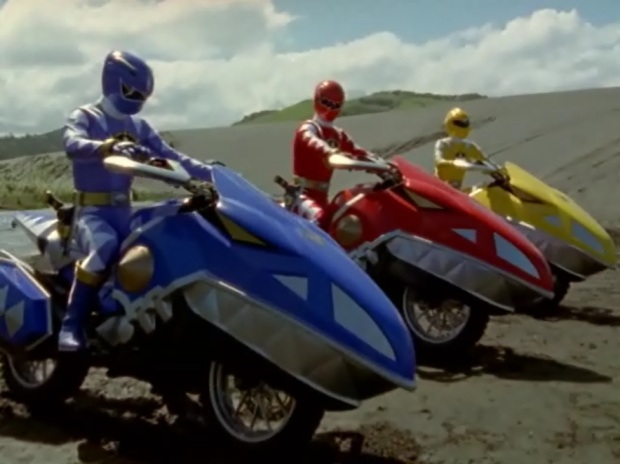 D is still in the first phase of primary, he’s done lots of simulator flights and about 5 actual flights in the T-6B.  The crazy summer thunderstorms make it tough for him to consistently fly but the simulator is always ready!  His training wing had a spouse orientation the other week and I got to do a short flight in the simulator, it was pretty fun but I think the Navy should keep me out of their aircraft unless someone else can land it.  Here I am flying over Pensacola.  In a skirt.  Which made it impossible to eject before my crash landing on the runway. 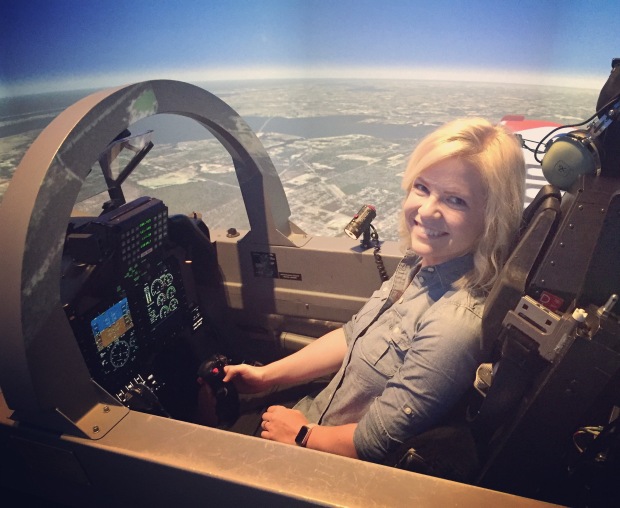 I can’t believe it’s been almost a year since D commissioned as an officer.  I was reminiscing the other day and thought of just a few things I’ve learned in my first year of being a Navy wife I would want other new spouses to know.

1. It’s hard being away from D, but I don’t have to be miserable. Yes, it sucked being thousands of miles away from my husband when he was at OCS and not being able to talk to him. Yes I hated that the only thing I had to snuggle at night was a pillow with a sweatshirt on it. Yes I spent a few nights sitting at the bottom of my shower crying because I missed a phone call and no way to call D back. But most of the time I had a great time doing lots of fun things – learning to run, yoga classes, girl time, sunbathing poolside, eating breakfasts for dinner – a lot of things that D doesn’t really like.  Being apart is a reality in the military, so if you don’t want to hate it, make a plan not to.

2.  Work is important to me, at least for now.  I’ll admit, I was sad to leave my practice in Oregon, but pretty excited about having some time off of work during the process of moving.  I didn’t realize until after I started working again, however, how difficult it would be for me to not have the confidence I get from working and how strange it would be to go from being financially self-reliant to completely reliant on D.  And I think I was a little bit more of an emotional mess than I wanted to be not working.  The reality of being a military spouse is that your career becomes secondary to your spouse (unless you don’t mind choosing not to live together) – this is harder for some than others, but figure out how you feel about it and do what you can to make the best of it when you can’t have what you want.

3.  Military life is constant change and unpredictability.  Not only do we have no clue where we’ll be living in the next few years, D has no idea what his schedule is in the next few days.  I can rarely predict when D will be home or not since he can’t either.  And there is a constant change in how busy he is.  He will be gone or studying for 12 hrs straight for a few weeks, and then may have a week or months of pretty much nothing.  That constant change in his schedule and productivity can be pretty difficult to adjust to for both of us.  It requires a plan A, B, C and learning to be okay if none of those plans work out.  It also means giving a lot of “I don’t knows” to family and friends who ask questions.  Note: Some family and friends are more willing to accept this answer than others.

4.  Military wives are awesome.  I absolutely love having ladies who are going through the same things as me.  I love meeting new people and building new friendships and having a built in support group.  And thankfully with technology, these friendships don’t have to end with a new duty station. (And I imagine it’s hard being a military husband,  but I bet they’re just as awesome.)

5. Ask for a military discount. I still forget this everywhere I go.

It’s definitely been a wild ride our first year in the military, I’m sure there are many more adventures ahead of us! Like when they have completely different requirements from licensure. MFT is a newer field, so there is no consistency state to state. Unfortunately the board in Florida made me take an extra graduate course to satisfy one of their requirements. They also told me this a week after fall semester started, so I had to wait until January to start the course (rather than taking it during the two months I had off before I started working again . . . grrr). But I’m DONE! I will say, it was pretty easy and not what I would consider graduate-level work except for this last week because I had to write my first paper in 4 years. I am happy to say I survived, everything is in and I just have to wait until next week to get my final grade. Hopefully that means very soon after, I can go back and change everything back to LMFT. I really miss that L.

Note for military spouses: This is definitely something you’ll experience again and again as you move around the world no matter what your field. Thankfully some states recognize this and have expedited processes or reduced fees for military spouses (yay for Florida, boo for Oregon). I have discovered, however, that you do have to do a bit of legwork to make that actually happen (Hint: Very BLUNT, semi-angry emails to the supervisors of supervisors seem to help to get the ball rolling). I also realized I should have looked into scholarships and grant money for spouses a lot sooner. I had to pay for my course before I did enough research, but most programs will only give you money in advance, rather than reimburse you.

D has two more tests left in API- eeek! We are keeping our fingers and toes crossed that all continues to go as well as its been going so that we can celebrate (and just take a giant breather) this weekend. Any extra luck sent our way would be appreciated!

So one of the joys of military life so far (please pick up on sarcastic tone here) is the back and forth between D working hard and hardly working.   There’s been a lot of waiting since we moved down to Pensacola, which in some ways was really nice, but its pretty tough to transition from doing practically nothing to working basically from waking up til going to sleep 7 days a week.  Since API started, D has been gone for about 10hrs a day for school and spends the rest of the nights and weekends studying at home or with his study group.  We do Friday date nights which helps, but its kind of hard going from probably spending too much time together to hardly spending time together at all.   D has been doing great on all his tests (he has two a week) but its pretty intense.  If he doesn’t get an 80 or above, then they have to roll back and join another class, which could mean several more weeks (sound familiar?).   And on top of the academics he’s had PT tests and swimming tests (including swimming a mile in a flight suit – eek!).  We’re both really hoping that he continues doing well so this craziness is as short as possible!  As for now, I’m spending lots and lots of time with this guy: 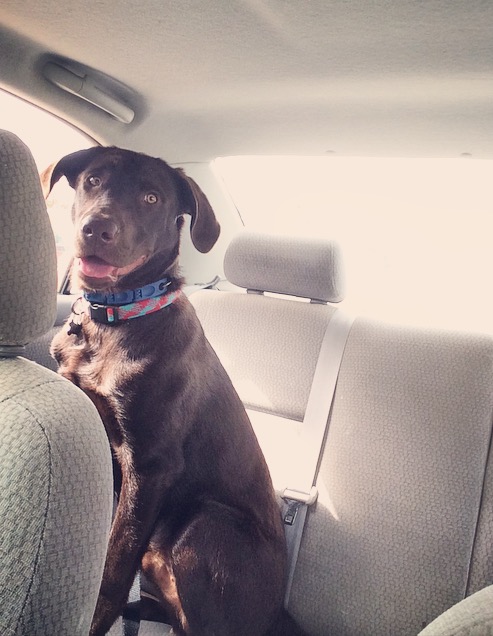 Last week was especially rough for me because we had another tornado on Tuesday.  If you haven’t heard about it, it was pretty bad – thankfully no one was killed or even seriously injured in our area, but there were a lot of homes and buildings destroyed.  (You can read more about it here.)  When I told D I had rescheduled my clients so I wouldn’t have to work that night, he didn’t even know what I was talking about because he was holed up in class all day.  He was way too stressed with studying to really care, while I was prepping food and water and trying to figure out how to keep us and our fur babies safe.  I finally convinced D to take shelter in our bathroom when the news said that a “deadly and dangerous tornado” was directly over our area of the city and the lights started flickering.  We stayed in there for about 15 minutes and when we came out, found that the tornado path and damage was only a mile from our house.  I felt so weird all week with how close it was.  How people’s lives were completely turned upside down just a mile from us, while we just went on with going to work (driving right by the damage) and living our normal life.  I know  with living in this area there will definitely be more crazy weather, but I really hope we don’t see worse than this.  We’re feeling very grateful to have been spared (again) from any damage.  I hope we can always remember how lucky we are in so many ways.

If you’d like to donate to help the families affected by the tornado you can go to helpNWFLrecover.org